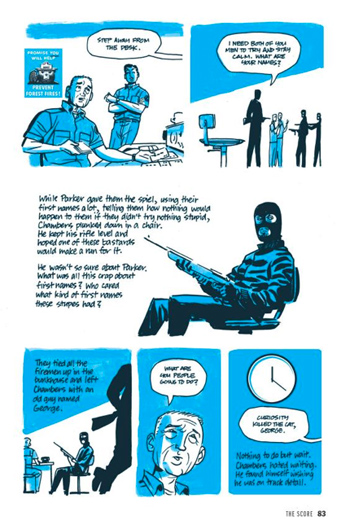 Did you love “Ocean’s Eleven” (either the 1960 Frank Sinatra original or Soderbergh’s 2011 remake with George Clooney and Brad Pitt), too? Love the idea of a big crew pulling a big heist? Sure, taking down a casino is ambitious, but how about taking down an ENTIRE TOWN? I highly recommend:

“The Score” (1964) was the fifth novel by Richard Stark (a nom de plume of Donald E. Westlake) that follows hardboiled heist master “Parker,” a character whose stories have been adapted into film (notably Mel Gibson in “Payback”), but never by name until award-winning animator/artist Darwyn Cooke pitched the idea for these 1960s-set Graphic Novel thrillers (“The Score” being the third of four). Westlake was so impressed with Darwyn Cooke’s Saul Bass-style treatment, he gave his blessing to use the name Parker for the central character — something he had never previously allowed with any film adaptation of the Parker novels.

By the bye, there is an upcoming adaptation of Stark’s 19th (!) Parker novel, “Flashfire”. “Parker” is currently filming and scheduled for release in 2013. Jason Statham stars as the title character, along with Jennifer Lopez (who was fantastic in another great Clooney heist flick, “Out Of Sight”) and Michael Chiklis. Nice!

GIVE IT A TRY!